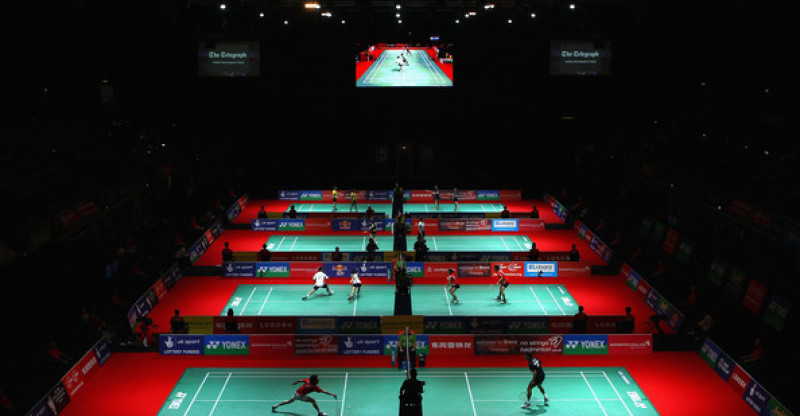 Equipments needed to play badminton are

How to Play for Fun and Quick with some Unofficial Rules

But when you play for fun, not all are those equipment’s are necessary, all you need are only racket and shuttlecock.
If you play outdoor, you can just draw a line on the ground to divide the each opponent area.
Then you are ready to play.
The quick and simple rule in playing badminton is,

It is that simple.

Let’s Play It Now. (Example of The Just for Fun Games)

Play until your agreement point. You can use 21 points for the winning point each round, use 3 rounds to decide the winner or just play until you get tired or bored. 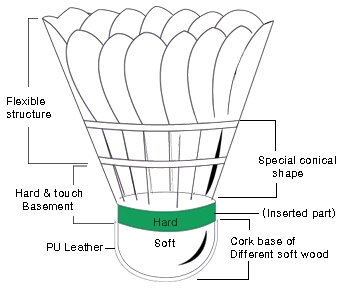 Shuttlecock is like tennis ball in tennis. or soccer ball in soccer. Shuttlecock is made from cork base covered with leather with 16 thin-layered feathers. People use duck feather or goose feather. Goose feather is the best quality for tournament purpose. There also plastic shuttlecock but the fly is not good, it is very durable and can save your money.
If you want to practice to be a pro or at least a good player, use feather shuttlecock.
I recommend using feather shuttlecock from the start because the feel of the play will be more real than when you use plastic shuttlecock.
Goose shuttlecock price from US$25 for 12 pieces. The quality of flying, the sound when you smash goose shuttlecock is very good. You should try it.
Brands of shuttlecocks are Yonex, Victor, Li Ning, Aerosense, RSL, and others. Yonex is the most famous brand. Just try which one is suit you best.

Brands of rackets are Yonex, Victor, Genji, Wilson, Li ning, and Apacs. There are many brands but yonex is one of the most famous brand.
Use lightweight racquet for beginner. You can read our guide about badminton equipment here.

[The net shall be made of fine cord of dark colour and even thickness with a mesh of not less than 15 mm and not more than 20 mm.
The net shall be 760 mm in depth and at least 6.1 metres wide.

The top of the net shall be edged with a 75 mm white tape doubled over a cord or cable running through the tape. This tape shall rest upon the cord or cable.

The cord or cable shall be stretched firmly, flush with the top of the posts.

The top of the net from the surface of the court shall be 1.524 metres at the centre of the court and 1.55 metres over the side lines for doubles.]

taken from BWF, Laws of Badminton

Look at the picture, you will understand it easier. 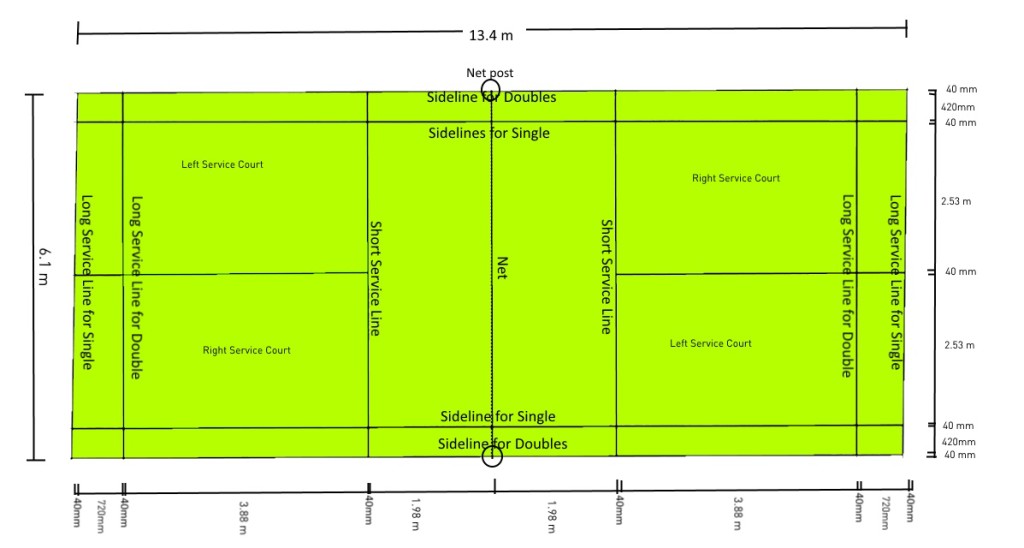 The use of the line will differ according to single play or doubles play.
You will understand it if you read the single and doubles rule below.

Court have two ends(side), your court’s and opposite court. Players or teams will change end/side every round and at the third game when a person achieve 11 points

In the middle there is net. Any shuttlecock that touch net and didn’t pass through the net shall count as fault. 1 point score for the opposite team.

How to Compete with the Official Badminton Rules 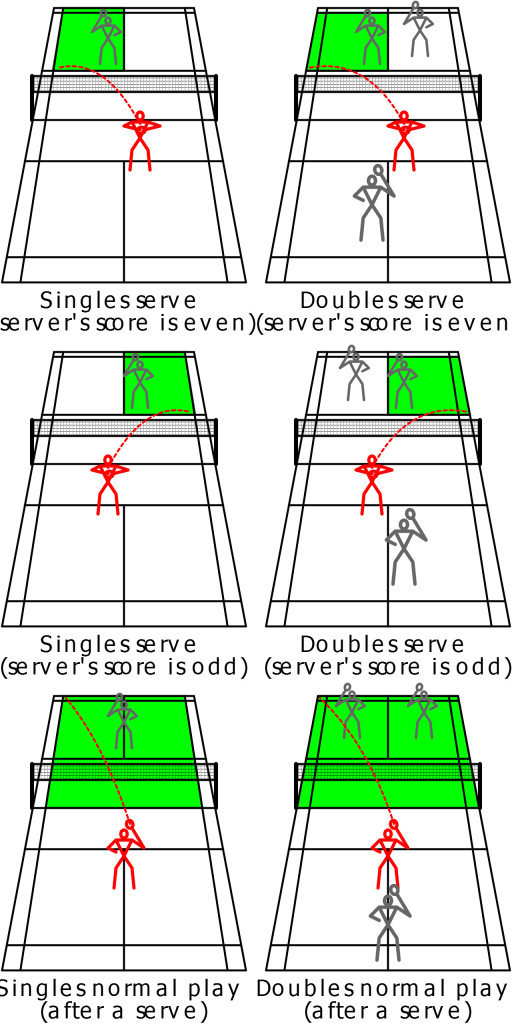 Start from tossing a coin. The winner decide the court’s side to play and he or she shall serve first.

Let’s look at the image below. 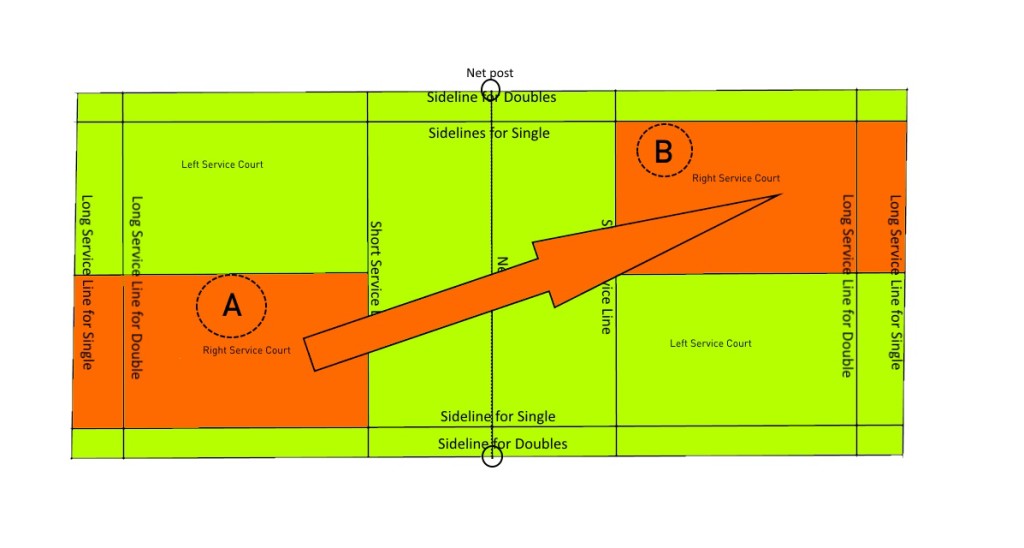 On odd number score (1,3,5,etc) of the server, the server shall serve from left side service court. When servicing, “A” shall land the shuttlecock inside B’s yellow area. If land outside the B’s yellow area, it is a fault. (1 point for B) 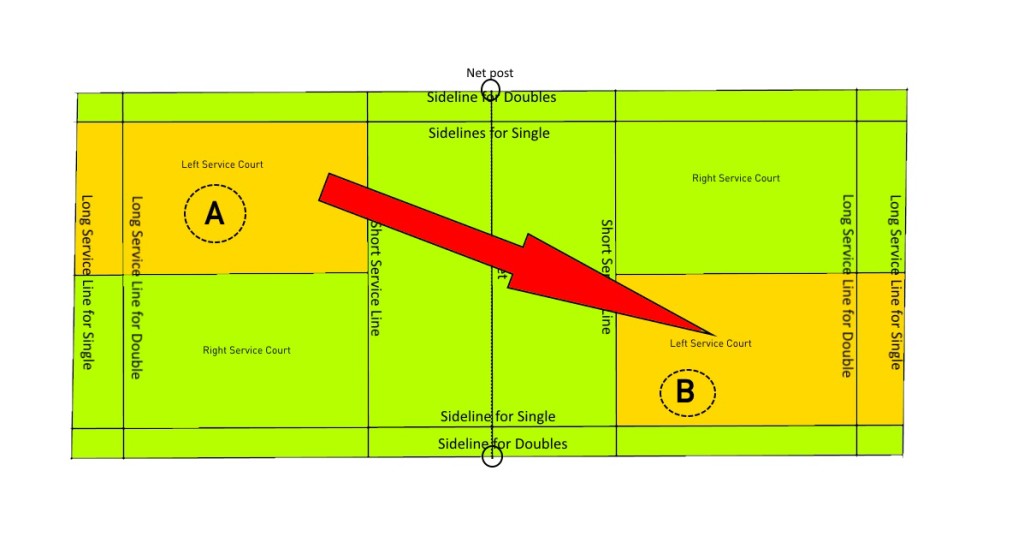 The receiver shall wait the service inside the diagonal position side.

After receiving the service, the boundary line to score a point is like this image. 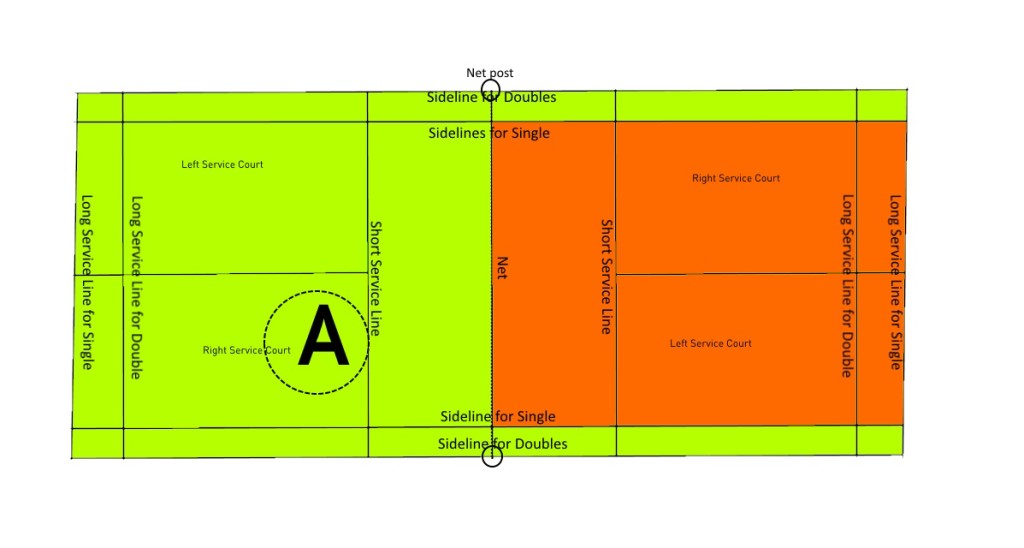 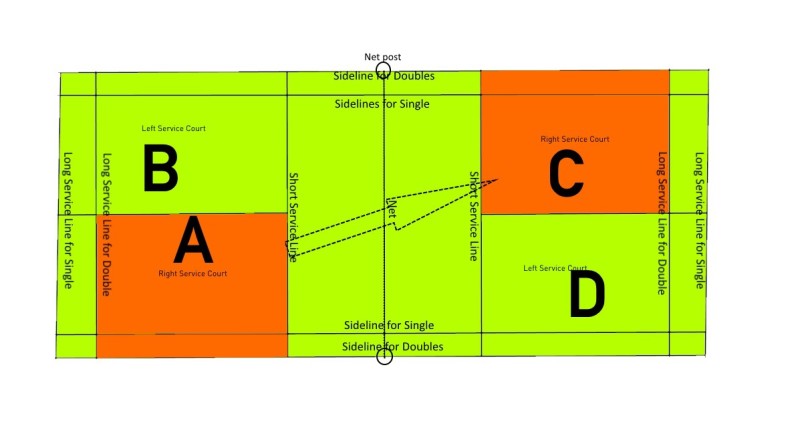 Look at the case when AB team point is odd (1,3,5,7,etc). The server shall stand on left service area and shall land the shuttlecock to D’s red area. If shuttlecock land outside D’s red area when still in service, it is a fault. 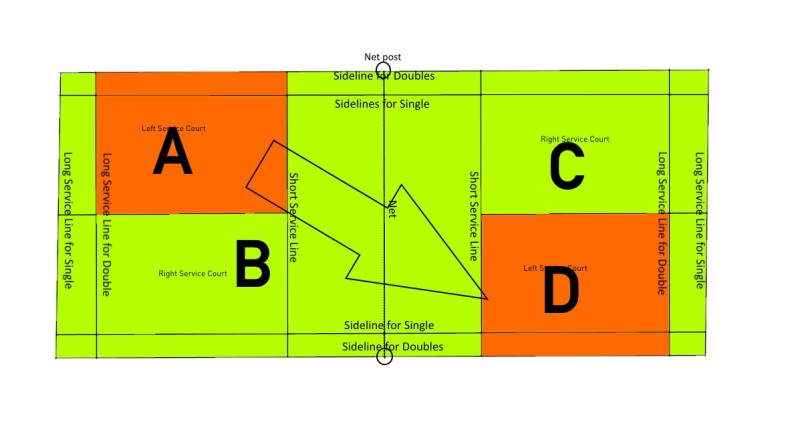 In doubles game, the difference with single play is: there is a sequence when you will serve. Server will be still the same person when the server side score. Server change when the receiver side score a points.

You will understand better if you follow this game below.

AB win the coin toss so they serve first. When the score is 0( A B team)-0 (C D Team), A serve from right side of their court. A serve diagonally to C, the shuttlecock shall land inside C’s red area. If land outside C area it is a fault ( CD team gets a point)

When “AB team” score a points, 1-0, the same server move to left side and serve. A stand in the left side and serve to D. The shuttlecock needs to land at D’s red area. If land outside D’s rea area, it is a fault (1 point for CD team)

When CD team score a point so the serving is by the CD team. The receiver ( AB team) shall not move from their last position so A still on left side and B on the right side.

After receiving the serve, area in play is : 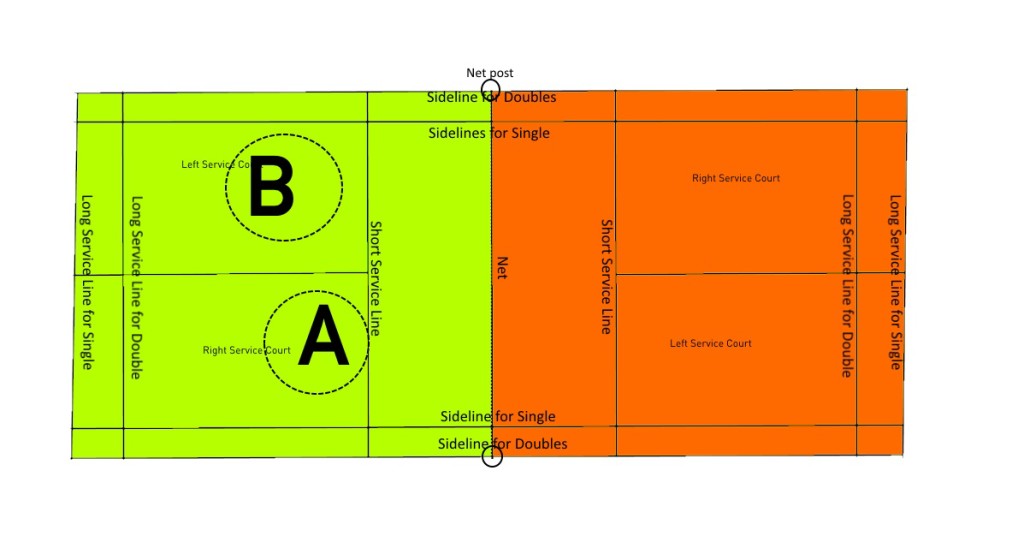 You score by landing the shuttlecock inside the opposite courts inside the boundary.

You make score too when there is fault by opponent side
ie.

A fault will give one point to opposite side.

Some faults to notice

A game consist of 3 rounds. If you win consecutively 2 round, you will win without need to play the 3rd round.
You win a round by scoring 21 points.

In the case of both side achieving 20 points, score will continue until whoever lead by 2 points will win.
At 29points – 29 points, whoever reach 30 points first will win.

There will be almost no rest in the game. There is a short interval when leading point achieved 11 at each round, the  interval is shall not exceed 60 seconds, and 2 minutes interval between each round.

“Let” means no point scored in the rally. The last server will serve again.
What make let?

When to Change of Court’s End

Who serve first at the next round (second and third game)

1. Q: What happen when a player touch the net?

A: It is a fault. A score for the other side.

2. Q: What happen when in the service the shuttlecock hits the receiver partner (doubles game)?

A: It is a fault for the server. A score for the receiver side.

3. Q: Can a player change racket in the rally?

A: Yes, it is permitted.

4. Q: What happen if a shot hit the top of the net and pass through the net?

A: If the shuttlecock hits the top of the net and then pass through the net, it is counted as a point.

5. Q: What happen if a shot hit the top of the net and fall into the shooter own court side?

7. Q: Is it a fault to strike the shuttlecock with the frame of the racket?

8. Q: Is it legal to throw the shuttlecock up in the air and shoot it, when one is in service?

A: Yes, it is legal. But the server shall hit the base first.

9: Q: Is it illegal for any body part to go under the net?

A: It is not written anywhere as a fault so it is legal. As long as you do not distracting the opponent. Meaning the action is a part of body balance.

10. Q: Is it a fault when a shuttle hitting the head and the stringed area of the racket in one stroke?

11. Q: Is it a fault when shuttle touches the ceiling or side walls? How about if  the shuttlecock touches any other object or person outside the court

12. Q: Is there a rule where the receiver partner should stand when in a service in doubles game?

A: Receiver partner can stand anywhere in their respective court as long as not hindering the sight of the opposing server or receiver.

13. Q: In a service, is it a fault for the server to hit the shuttlecock below waist (Shuttlecock is below waist in the moment of hitting)?

A: Yes, but it is a grey area. The latest law describe waist as ” imaginary line round the body, level with the lowest part of the server’s bottom rib. There is experimentation law that “the whole of the shuttle shall be below 1.10 metres from the surface of the court at the instant of being hit by the server’s racket”.

14. Q: What is the meaning of “the shaft and the racket head of the server’s racket at the instant of hitting the shuttle shall be pointing in a downward direction.”?

15. Q: What happen when the shuttle hit the net post? 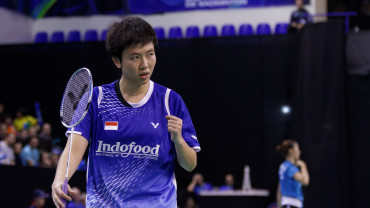 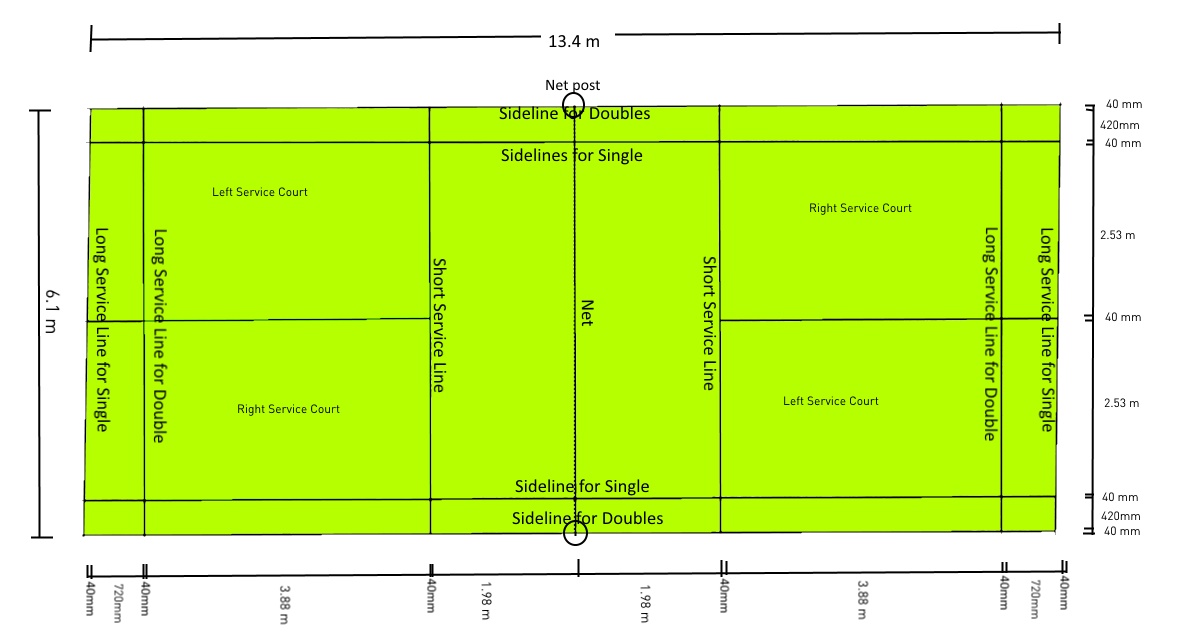 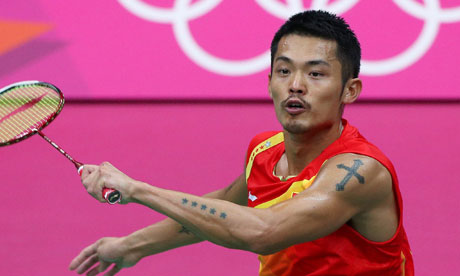